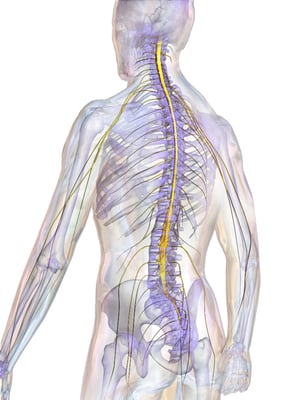 HCI researcher Samuel Cheshier recently partnered with scientists from Stanford University School of Medicine to publish a study on that very process. Cheshier explains, “The need to understand medulloblastoma and how it spreads is incredibly important in order to know how to treat the cancer and find how to stop the disease from spreading, or metastasizing.”

In analyzing tumor samples from patients, the team found a protein called NOTCH1 that's deeply involved in metastasis of group 3 medulloblastoma. It moves around, embedded on the surface of cells like sprinkles, and finds its way to another protein called TWIST1, to which it attaches. That attachment causes a chain reaction, like dominoes falling, and metastasis (the spread of cancer) is the final domino in that chain reaction. In scientific terms, this sort of chain reaction is referred to as a signalling pathway.

They ran several experiments to confirm that the NOTCH1 signalling pathway initiates the spread of the brain cancer:

In the face of all this evidence, the team of scientists concluded that "the activation of the NOTCH1 signalling pathway increases group 3 medulloblastoma spinal metastasis" and that interfering with the pathway is a potential target for the creation of a new cancer treatment. Their work also suggests that interfering with the pathway doesn't seem to have adverse effects, making it an especially "promising target".

The researchers even tested a potential drug in mice with the cancer.

Their next step is developing a human clinical trial using the drug they tested in mice. It would likely be administered directly to the fluid surrounding the brain and spinal cord near where a patient's tumors are located. The team hopes it will have few side effects and lead to more effective treatment of the common childhood brain cancer.

Get IT news and blog updates delivered to your inbox. Keep up with VLCM, Subscribe to Email Updates