The Challenges and Payoffs of Wireless Networks

From laptops to smart phones, the average business person carries three mobile devices with them from place to place. This means that your wireless network needs to be ready to support multiple devices at any given time.

Wireless Over the Years 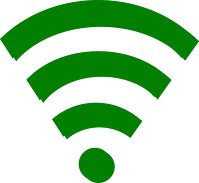 The origins of Wireless date back a bit further than the actual usage of the technology by the public, but it’s safe to say that Wireless, Wi-Fi, WiFi, Wifi (however you want to say or spell it) has been around now for two decades. A lot of things have changed since the early years of wireless, and these changes have made it a very reliable and expected way for us to connect to the internet. Speeds are faster, connectivity is more accessible, and even the price per user is better than it was in the past. Yet, with all these advances, we can certainly expect that there will also be new challenges along with them. Nonetheless, Wi-Fi is a technology that is only going to grow in cases of deployment and user preference. So if you’re business locations aren’t onboard yet, perhaps it’s time for you to consider implementing Wi-Fi into your network. Or if you are onboard, it might be time to look at upgrading to newer and better.

Wi-Fi in Its Infancy
Remember the days when every phone was connected to a cord. Then as time progressed, the latest and greatest became the Cordless. How cool were those phones? You could take them to any room in the house and still get good reception without being tethered by some curly cord. Nowadays, a corded phone is almost a vintage piece, for home use at least. (And you know the rest of the story: years later, we saw the car phone, and eventually the cell phone and smart phones.) This increased ability to have mobile, untethered access to a phone, fueled technological advances in the matter. Well, the same thing happened with the computer too.

The way we connect to the internet these days is very similar and has taken a course akin to the progress of the telephone. Just think of how many places you can go for a Wi-Fi connection in the year 2014. Schools have connections, restaurants have connections, even public transportation systems have connections. If you’ve ever taken the FrontRunner here in Utah, then you know how you can connect to UTA’s wireless network while traveling on the train. Like the telephone, Wi-Fi has definitely come a long way and made for some very useful applications.

The early forms of wireless were IEEE 802.11a and IEEE 802.11b. Then came IEEE 802.11g, which was a little faster and overall better then B. Initially, these wireless versions were spotty and less reliable than wired connections. In a lot of ways they were seen as secondary network connections. Users of any given network may often have heard from their network admins: “the wired network is running, but the wireless is down.” This wasn't uncommon in those days. But wireless speed and efficiency progressed relatively quick, and soon we saw the genesis of IEEE 802.11n, which could manage up to 450 Mbps and was even faster than G. Now, even newer than N, is the newest version called 802.11ac—supporting up to 1.3 Gbps per radio—whereas 802.11g was supporting only 54 MBPS. That’s over 20 times more throughput than the older systems that replaced A and B back in the day.

Wi-Fi and the New User-Centric Model
When we were on the G networks, we were still managing hardware, and it was hardware owned by the company. However, that’s not so much the case anymore. Now, IT professionals have been compelled to move toward a user-centric model, where the devices we manage are often times user owned. The fact is that we live in a time of mobile devices, where few and fewer users are ever fully confined to a desktop any more. Today, users have their smart phones, tablets, laptops, e-readers, and more. With more and more mobile devices able to access our networks, we need to expand our Wi-Fi capabilities in order to keep up with demand, and we have. Throughput capabilities now have enabled wireless deployments to host more users and more users’ devices. In the past, a wireless access point could support up to 5 users, but with the new IEEE 802.11ac and the enterprise-level access points that are available today, a good high-end access point can be loaded with users, as much as 50 or more. 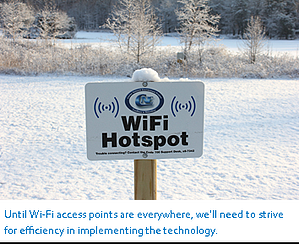 Challenges of Wi-Fi
With the increasing demand for wireless networks comes increasing challenges. In fact, one of the greatest challenges for any IT professional implementing a Wi-Fi network is the difficulties associated with channel interference. In the 2.4 GHZ band, there are only three non-overlapping channels, 1, 6, and 11. This means that if you were to have four access points relatively close to one another, two of them are going to be on the same channel. Inevitably, they will interfere with each other and start to affect the signal.

This becomes an even greater problem in multi-tenant environments. If you were in an eight-story building with other businesses above, below, and around you, and they all had wireless, it could pose quite the dilemma. At some point, then, it would behoove you to maintain fewer access points—those that are built to accommodate more users—so that there are fewer signals taking up the available channels. In fact, VLCM has dealt with multiple customers who have run into some significant struggles with their Wi-Fi deployment on this wise.

Wi-Fi Everywhere
With Wi-Fi technologies on the rise, access points will only increase in demand, but until access point are everywhere, those we have need to be bolstered and maintained efficiently. If we go back to the phone analogy, one can imagine the challenges that faced the experts in the early days of the telephone, and we’re well out of the infancy of Wi-Fi now. With this in mind, technologies will only improve from here—even considering the amazing advances we benefit from now—and Wi-Fi will become more and more the staple of our online connectivity. A stable and well-maintained wireless network has throughput speeds nearly as fast as wired connections these days, so the convenience and usefulness of Wi-Fi is evident. With the ability to access online information from a device that is as mobile as we are, the demand for wireless is increasing, and this is why we Wi-Fi.
If you’ve ever wondered what Wi-Fi would look like if the signals were part of the visible range of light waves, take a look at this interesting article and its photos: http://thecreatorsproject.vice.com/blog/heres-what-wi-fi-would-look-like-if-we-could-see-it 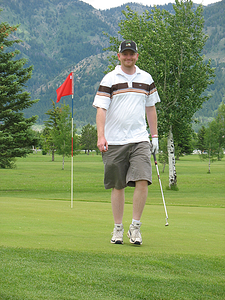 Darren Buttars is one of VLCM’s Solution Architects. In his role, he helps VLCM’s customers assess and plan the proper implementation of varying IT solutions. Darren has expertise in many areas, including firewalls, wireless deployments, routing, switching, and SSL VPNs, to name a few. But above all, Darren has considerable experience in wireless implementations. In his short time with VLCM alone, he has deployed over 30 wireless configurations and helped VLCM customers to manager those deployments. Apart from his IT work, Darren is also an avid golfer, taking to the green as often as possible.