Despite IT’s stressed out and tangled environment, every CIO’s goal is rather simple:

1) find a solution to drive down IT costs, and

2) deploy an infrastructure optimized with the end-user in mind.

If simplicity and efficiency are the two missing elements from your IT, then we have the best solution for you: Virtualization. By utilizing cloud deployment to the best of your organization’s ability, virtualization aims to reduce hardware footprint, automate operations, reduce costs, and better manage end-user’s day-to-day environments. We know you want your end-users to operate at rocket-powered speeds. The good news? You don’t need to be a rocket scientist to harness that kind of power. Here are our top four reasons for why you should go virtual.

Companies could build a tower to heaven with the amount of space they’re taking up by not utilizing virtualization technologies. Virtualization carves out all of the extra fluff-n-stuff by eliminating the need for physical desktops through a single VDI platform.

The table below lists how much VMware Horizon 6 reduced the number of physical servers, server development time, for three different industries.

While on the topic of “doing more with less,” along with virtualization comes automation (here’s where the rocket IT speed comes into play). Automation delivers an accelerated path to process standardization, enabling your IT organization to work across IT silos, while lowering operational costs and improving staff utilization. If taking advantage of higher ROI and more effective and efficient IT services are wrong, then we don’t want to be right.Learn more

According to this VMware study, companies using VMware Virtualization Software were able to reduce their server total cost of ownership (TCO) by 74% on average and realized an ROI of over 300% within the first six months of deploying the software. The chart below compares 3 different industries’ TCO and ROI before and after six months after virtualization implementation: 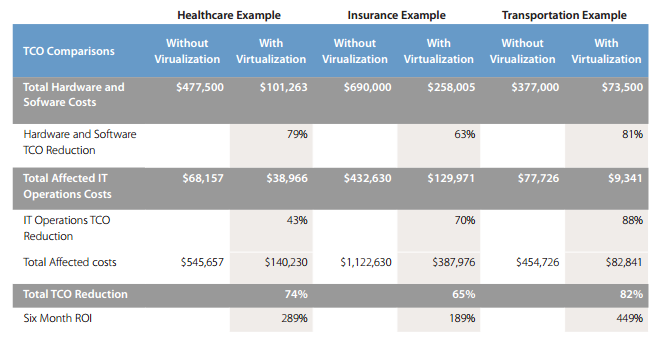 See an in-depth study on the three company examples listed above in this VMware Whitepaper.

The takeaway? Virtualization offers more tech for less. Extending the power of accessibility to end-users will strengthen your company's productivity for a better, more efficient work day.