0 Comments
Since the two companies emerged in the 80’s, people have been faced with the choice, Mac or PC. Fast forward to today, Microsoft owns 91.02% of the market share, and Mac at 5.57% of the market. Despite those numbers, IT directors are facing an increasingly mixed environment, as Mac continues to grow in popularity. The timing has created the right atmosphere for our second deadly IT sin “Mac Malice”. 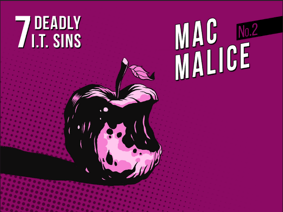 The more Mac's that are introduced into the corporate infrastructure the more challenges IT has on its hands when it comes to security. Macs have become an easy target for hackers and malware because they often lack endpoint protection.

“An astounding number of Mac users still believe that they are immune to malicious code,” says James Lyne, Sophos global head of security research. “It’s actually astonishingly easy to create malicious code for the Mac. And as most Mac users don’t use antivirus, it often goes undetected.”

Apple’s own employees had their Macs compromised by malware in February 2013 via a vulnerability in Java. In 2012, an attack on another vulnerability in Java infected 600,000 Macs with the Flashback malware. An infected Mac in an environment can lead to the spread of viruses, and malware, leaving a company exposed to damage of their infrastructure and/or theft of vital information.

The key to overcoming this deadly IT sin, is to follow these three easy steps:

In conclusion, it doesn’t pay to neglect the Macs on your network. It is easy to overcome the shortfalls when it comes to the lack of security, and it could save your company in the long run. VLCM and Sophos offer the tools and experts that can help you strengthen your defense. Click below to find out more about how VLCM and Sophos can help you overcome the second deadly IT sin and stay tuned as we cover the remaining Deadly IT Sins in the coming weeks.