Researchers have known for years that sitting for long periods of time leads to increased risk of cardiovascular diseases, diabetes, obesity, various forms of cancer, and mortality. This is a problem for office workers, who make up a greater proportion of the population than ever before, and for whom technological advances have further limited physical activity not only at work but also at home. Most office workers don’t even engage in much non-exercise physical activity—things like fidgeting, changing their posture, walking, and stair climbing.

More worrying, several studies have come to the conclusion that the negative effects of large amounts of time spent sitting at work likely cannot be counteracted by exercise outside of work, even exercise that meets or exceeds the recommended daily levels of physical activity. One researcher found that the group of his study subjects who spent the most time sitting had significantly higher risk of mortality than the regular population, regardless of how much they exercised.

Additionally, the rise in sedentary work has commonly been linked to the rise in the number of adults who are overweight or obese in the United States, which has increased to 65% over the last 40 years.

For the average adult, weight gain is a very slow process of greater energy intake than expenditure on a consistent basis. It’s estimated that most people’s long-term weight gain results from eating only 15 to 50 Calories more than they use per day. As one study says, “This small rate of weight gain may not appear to be clinically important and easily goes unnoticed by both clerical workers and their health care providers, but the cumulative effects of yearly weight gain are likely to contribute to the substantial increase in body weight that frequently occurs during adulthood.”

If such a small energy gap can cause weight gain and if sitting for long periods of time at work is harmful, then the natural conclusion is that small amounts of non-exercise physical activity—like using sit-stand desks—at work can help break the cycle. Indeed, the American Medical Association has recommended alternatives to sitting at work since 2013. 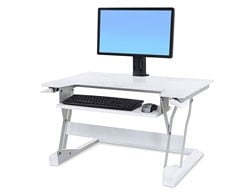 VLCM partner Ergotron is a leader in the industry with their sit-stand workstations, some of which have been used in research on this subject. Ergotron surveyed 307 of its customers and found that 84% felt less fatigued, 83% felt better, 60% felt they had more energy, 52% were more comfortable, and over half felt they were more productive than before they used the desks. Those great results aren’t seen only in surveys, but also in actual scientific studies.

In studies that tested whether standing at work helps relieve the stresses of sitting for such long periods of time, several benefits have been seen: higher heart rate while standing, significant increases in HDL (often called “good cholesterol”), and increases in comfort. One study reported its participants who used sit-stand desks at work experienced improvements in fatigue, vigor, tension, confusion, and depression. When the researchers took away the workstations, the participants’ psychological states returned to where they had been before the study. Workers who use the desks were 78% more likely to say their day had been pain free.

The benefits don’t stop there. Scientists have also estimated that energy expenditure is between 4 and 7.5 Calories greater per hour when standing versus sitting at work. The range has generally been attributed to individual differences between study participants. In multiple studies, most subjects were willing to stand for 2-4.5 hours a day. This translates to an energy expenditure of 8-34 extra Calories a day. “While small on an hourly level, the aggregate increases in energy expenditure generated from several hours of standing…could result in a biologically meaningful increase in total daily energy expenditure.” This isn’t enough to result in weight loss, but for some people it could result in the prevention of weight gain.

Sit-stand desks beat out both traditional sitting desks and standing desks. Scientists say, “Substituting prolonged standing for prolonged sitting results in a greater feeling of discomfort as a likely result of discomfort in the legs, back or shoulders due to prolonged standing. With a sit-stand workstation, the individual would be able to adjust their posture at the onset of discomfort and thus reduce the total amount of discomfort resulting from prolonged time in the same posture. These results suggest that changing posture throughout the day while using a sit-stand workstation may lead to reductions in work stress, discomfort and psychological strain, while contributing not only to increases in productivity but also to greater worker satisfaction and quality of life.”

Perhaps the biggest advantage of switching to the sit-stand workstation is that it takes no extra time out of the day, and that the additional energy expenditure is achieved without any of the negative aspects of exercising, like discomfort or sweating.

VLCM employee Kyle Kissell decided to try Ergotron’s sit-stand desk after his doctor recommended he should stand throughout the day in addition to physical therapy for knee pain caused by chondromalacia, a condition where cartilage under the kneecap deteriorates leading to bones painfully grinding together. He says, “The desk has really helped with knee pain that I was experiencing. I am still adjusting to standing while performing tasks that require a lot of focus and find myself sitting to do those. I really enjoy it for regular day-to-day tasks.”

Researchers have also noted a short learning period, but show that productivity is not impacted after the adjustment. What’s more, in one study none of the people who had used the workstations for three months said they’d rather go back to using their old desks, and most felt the sit-stand desks were easy to use, enjoyable, and comfortable.

Check out VLCMs Ergotron solutions to see if your organization may qualify for a free trial unit.