Battle of the Minis

Do you remember the very first desktop and/or laptop? When they were first released, desktops were pretty powerful, but very bulky. As for laptops, they were probably too heavy to sit on your lap and tended to be painfully slow. Lucky for us, technology has propelled the computer forward with powerfully light laptops, and slimmed down desktops with more capacity than we could've imagined. The trend didn’t stop there! We've seen the development of thin/zero clients and now, tablets and mini computers. Still, these new developments brought new challenges with them.

Thin/Zero clients created small affordable desktop computers that were flexible enough to fit just about anywhere. However, they would come with issues like poor processor and RAM, making them dependent on virtual environments. Too many thin/zero clients would bring too many virtual environments, so the experience of using this solution would start to become frustrating, with huge lag and slow processing. 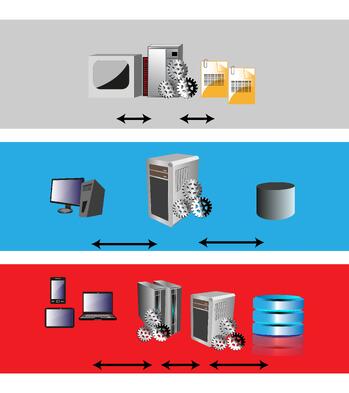 Finally a solution had presented itself. The minis, or in some instances the tinys, have offered practical solution for many situations. It was realized that if you combine components deployed in most laptops and integrate it with some desktop components, then you could create an ultra-small and very powerful desktop computer. One of the biggest advantages is that it could be deployed in tough places like under desks, or right on the back of a monitor. Companies at the forefront of this innovation are all VLCM partners- Apple, Lenovo, and HP.

The Mac Mini is the oldest of the minis, and the most expensive. Dimensions on the most recent iteration is 7.7 inches square, and 1.4 inches tall. This tends to weight just under three pounds. Today the Mac Minis comes in one of two flavors, an Intel Core i5 (1.4GHz) on the low side or an Intel Core i7 (3.0GHz) on the high side. The advantage is that it performs well, and has an established history of reliability. The tough sell for these is that few business environments are ready to move from their current windows-based solution to a Mac OS, they tend to run a bit more expensive than the alternatives, and the lack of ability to upgrade RAM.

This partner markets their version as a micro desktop, and calls it the M series Tiny. Dimensions on this version is 7.2 inches by 7.16 inches, but 2.5 inches tall. The Tiny weighs in at around three pounds. These can be found in a rainbow of versions, ranging from the Intel Celeron (2.4GHz) to the i3 (2.90GHz) and all the way up to the i7 (3.0GHz). Advantages of this offering is that they are very small, sturdy, and they run cool and quiet. On the downside it is newer to the market, lacks an SD card slot, and HDMI port.

HP sticks to their traditional number system, and offers a mini desktop under the model number of 600 G1 and 800 G1. The dimensions on their series of minis 6.9 inch by 7 inch and 1.3 inch tall. Both models weigh just under three pounds. These can be found in three different versions, Intel i3 (3.1GHz), i5 (2.00GHz) and i7 (2.2 GHz). Advantages on this version is that it is the smallest of its kind, it is incredibly efficient, and runs quiet and cool. On the other hand it is the newest one on the market, it only has a 100Mbps Ethernet and a display port as the only digital option.

Having had the opportunity to learn about and use all three different companies’ offerings, I am leaning towards the HP version. The downside of being the newest on the market also gives it the advantage, by learning from the other companies' mistakes. When in use it is silent, and remarkably cool. Though you would want to make sure you find the one that fits your environment the best, I highly recommend investing time and resources into looking at the HP 600 G1 or the HP 800 G1. I promise it will create another first that you will never forget. Speak to our end user computing specialist to learn more.